Are Evangelicals and Catholics Coming Together? 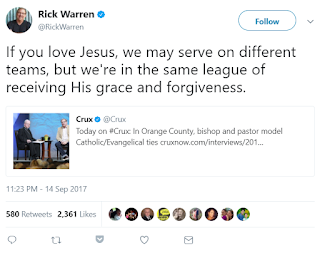 As you reflect on the Reformation 500 years later, you'll notice that there's growing support for reversing it.  Folks are building bridges on both sides of the Tiber River in an effort to bring Protestants back home to Rome.

In 1994, an ecumenical document called “Evangelicals and Catholics Together” shook the Christian world.

In 2014, megachurch evangelical pastor Rick Warren called Pope Francis “our pope,” erased the major differences between Catholics and Evangelicals, and recently made headlines again when he said that Catholics were partners in ministry and recipients of God’s grace.

Last month, Pope Francis met with Catholic and Evangelical Charismatics and said that the Holy Spirit gave them all forgiveness and “unity in diversity.”

Let us not forget that the Catholic church anathematized anyone who believes that a sinner can be justified by grace alone apart from works.  This means that they teach anyone holding to this belief will go to hell because of it.  They very politely admit this is still in effect here.

Unless the Roman Catholic Church repents of its false doctrine, there can be no true Christian unity between Evangelicals and Catholics.
catholicism charismatics ecumenism evangelicals Pope Francis Reformation Rick Warren